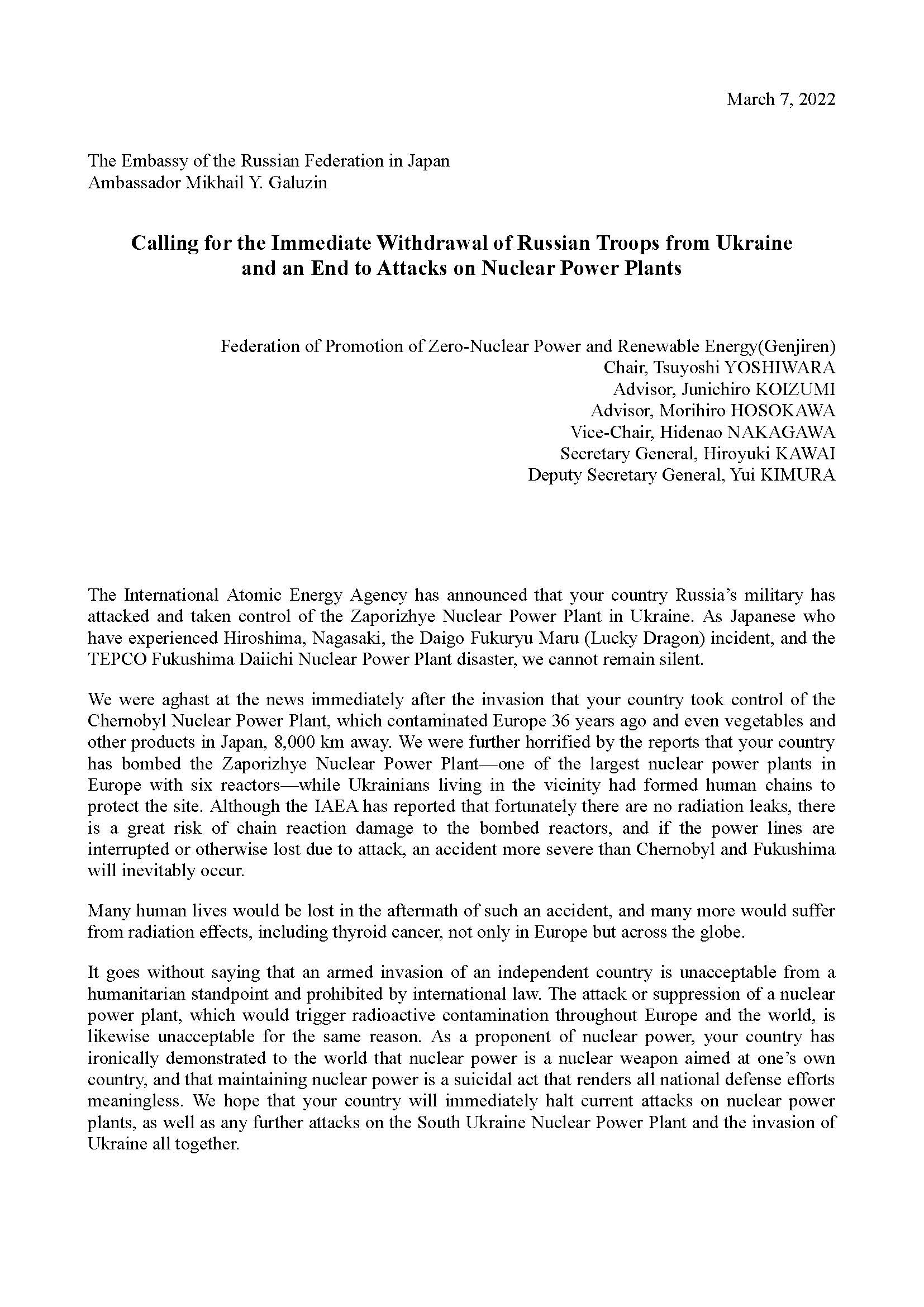 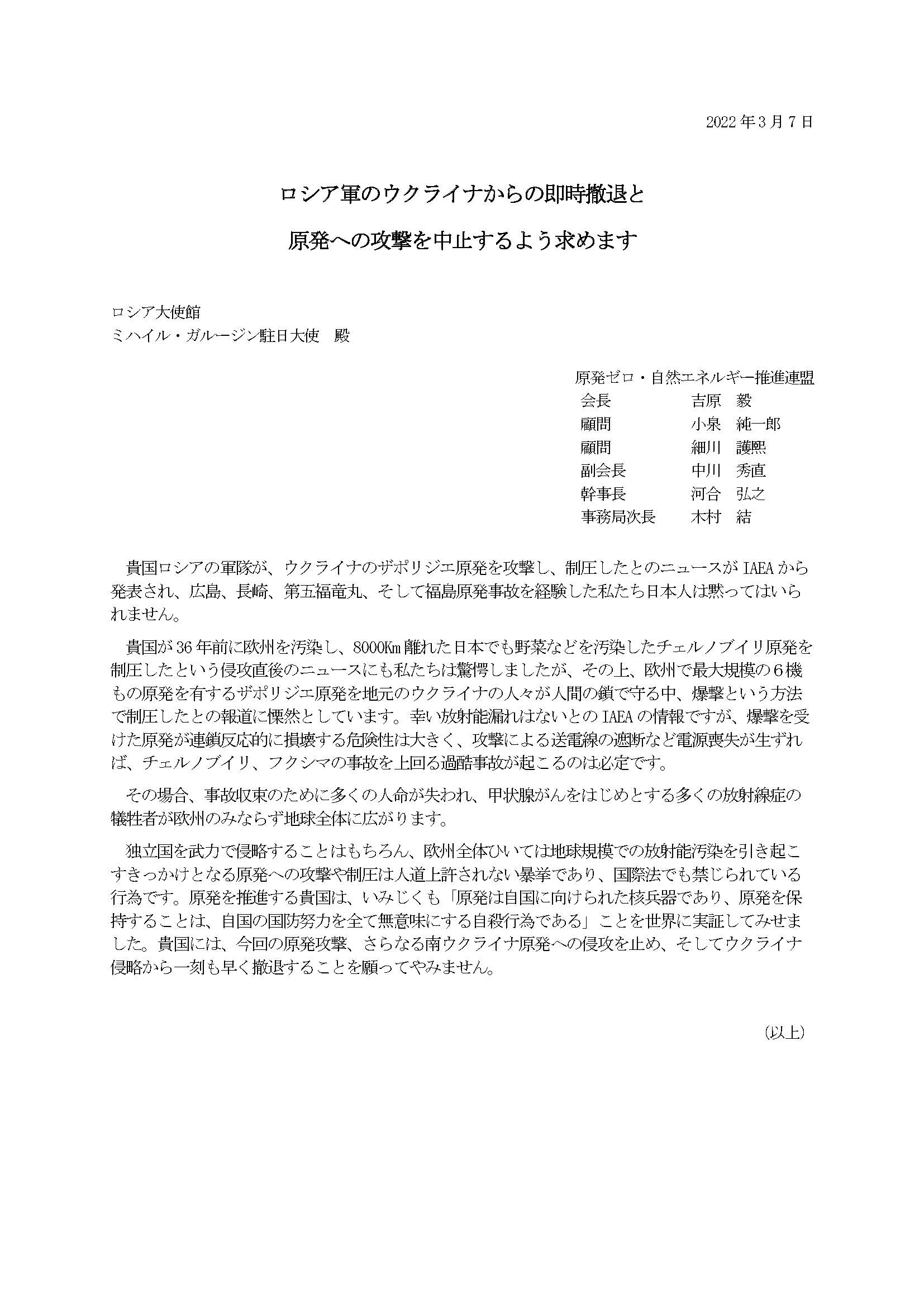 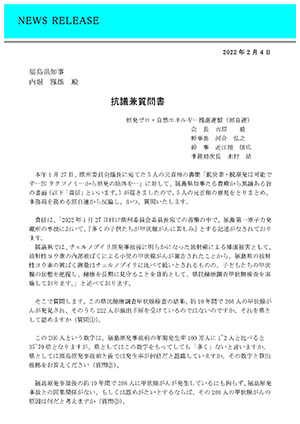 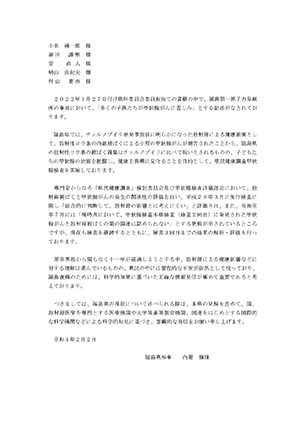 The English translation of each statement follows after the images of the PDF files. 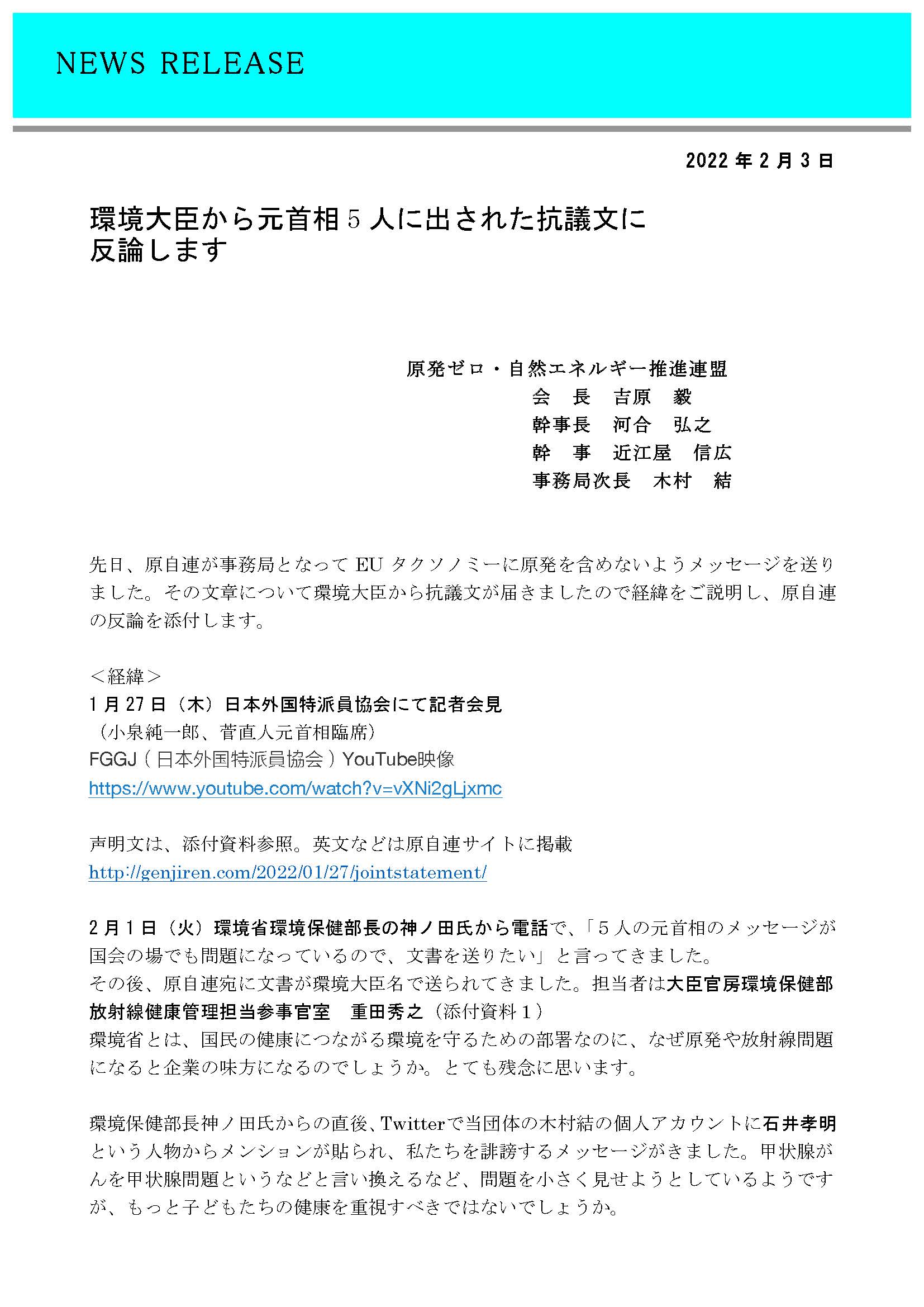 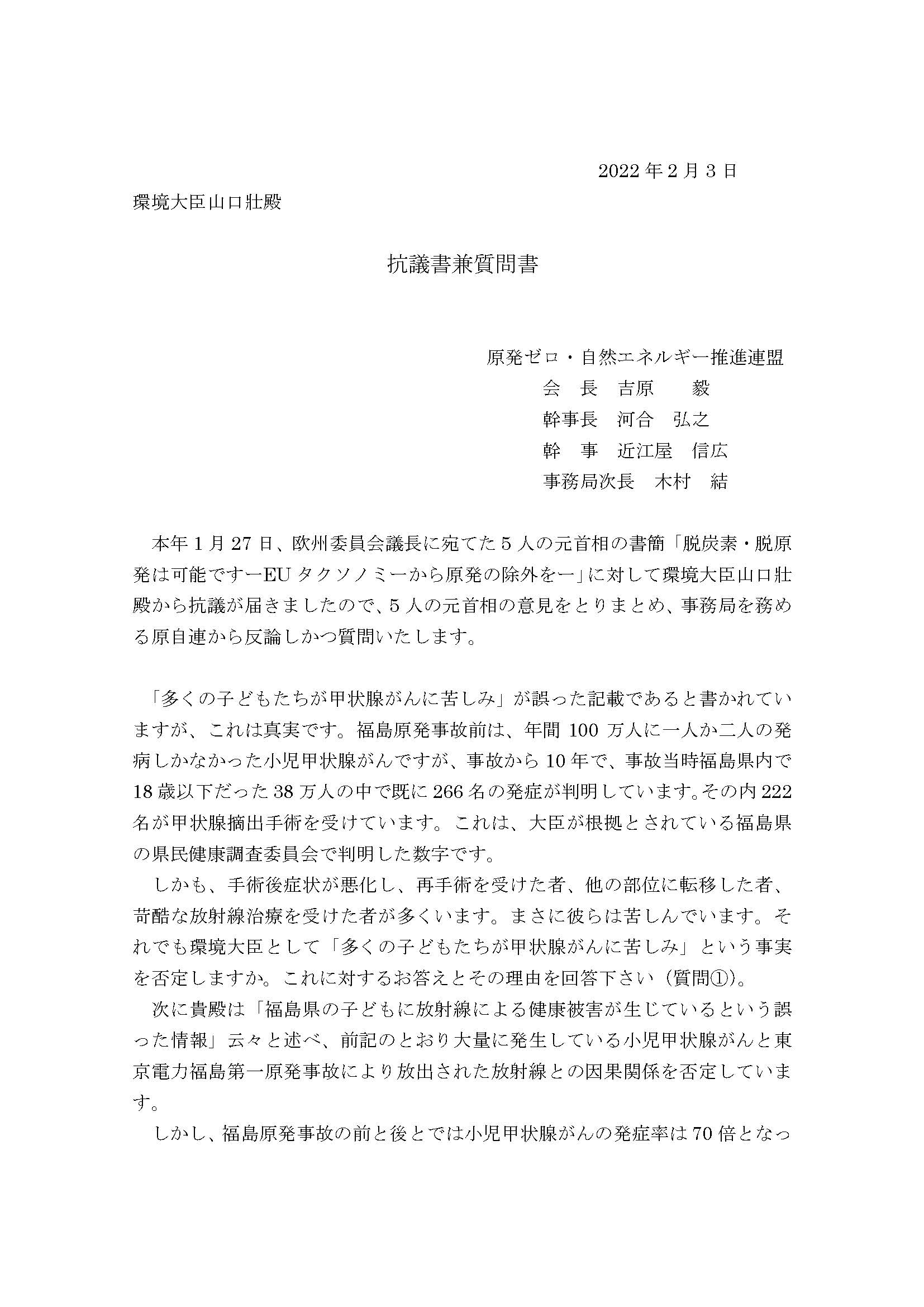 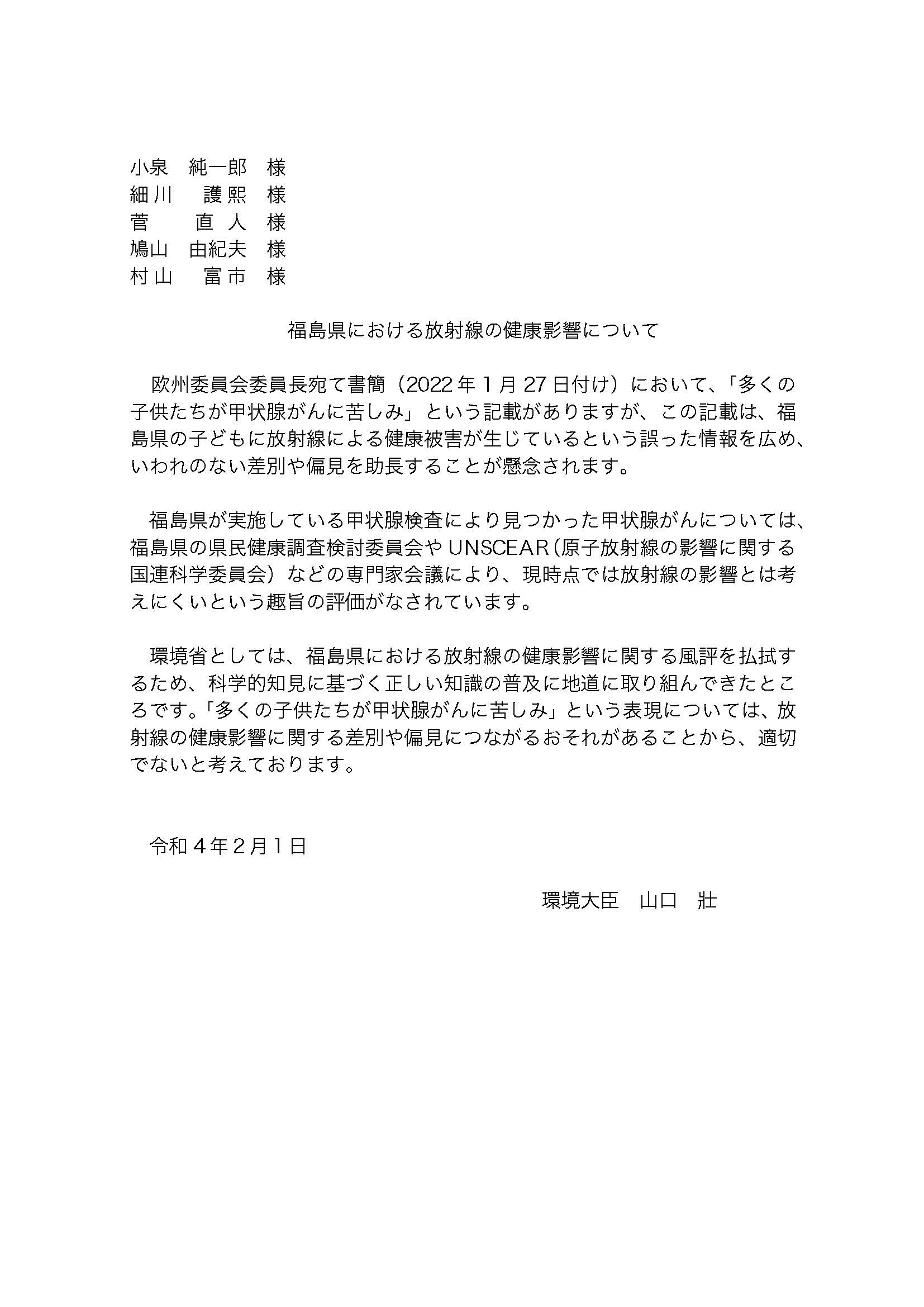 A message calling for nuclear energy to be excluded from the EU Taxonomy was recently sent by the Federation of Promotion of Zero-Nuclear Power and Renewable Energy (Genjiren) as secretariat. A letter of protest in regards to this was received from the Minister of the Environment of Japan. We hereby explain the background to this and attach the response on behalf of Genjiren.

On February 1 (Tuesday), a telephone call was received from Mr Kaminota, Director of the Environmental Health Department of the Ministry of Environment, stating that “the message from the five former Prime Ministers also became an issue in the Diet, and we would like to send a statement.” Following this, a letter in the name of the Minister of the Environment was sent addressed to Genjiren. The person in charge was listed as Mr Hideyuki Shigeta, of the Counselor’s Office in charge of Radiation Health Management, Environmental Health Division, Minister’s Office (appendix 1).

While it should have the role of protecting the environment, linked to the health of the people, why does the Ministry of Environment side with corporations when it comes to issues of nuclear energy and radiation? This is extremely unfortunate.

Immediately after receiving the communication from Mr Kaminoda, Director of the Environmental Health Department, someone named Takaaki Ishii mentioned on Twitter both Genjiren and Yui Kimura of the organization’s personal account, as well as messages of a defamatory nature. It seems that he is trying to make the problem appear smaller by calling thyroid cancer “thyroid issues,” but should we not be more concerned about the health of children? Mr Goshi Hosono also has repeatedly tweeted on his account on this issue, based on the news in the Sankei Shimbun.

In a fixed tweet on Twitter (January 14), Mr Hosono says: “As Goshi Spirit, I will put an end to child abuse.” However, he displays no empathy or compassion for children suffering from thyroid cancer. Can he not see that the children are being abused by the nuclear disaster? It is hard to believe that this is the same person who was in charge of dealing with the disaster under the Democratic Party of Japan at the time.

Ms Sanae Takaichi has also made a statement, and it seems that commentators are also mentioning the issue on television. It seems that nobody wants to admit to issues of radioactive contamination and exposure, however, there are people who are sick as a result of actually being exposed. We hope that the discussion will further increase to make people aware of this fact. We hope that members of the press will also pay attention to this discussion, and cover it within their reporting.

Letter of Protest and Questions

On 27 January 2022, a protest from Minister for the Environment Yamaguchi Tsuyoshi
was received in response to the letter sent by five former Prime Ministers of Japan to the
President of the European Commission entitled “Pursuing a Nuclear-Free and Carbon-Free
Society is Possible: Exclude Nuclear Energy from the EU Taxonomy.” The Federation of Promotion of Zero-Nuclear Power and Renewable Energy (Genjiren), which serves as the secretariat for this initiative, has compiled the positions of the five former Prime Ministers and hereby sends this response and questions.

The Minister’s letter claims that the statement in the five former Prime Ministers’ letter that “many children suffer from thyroid cancer” is false information, however, this is a fact. Prior to the disaster at the Fukushima nuclear power plant, only one or two children per million were diagnosed with thyroid cancer each year. However, in the ten years since, 266 of 380,000 people aged 18 or under in Fukushima Prefecture at the time of the disaster have already been found to have thyroid cancer. Of these, 222 have undergone thyroidectomy surgery. These figures are from the Fukushima Prefectural Health Survey Committee, which the Minister uses as his basis.

In addition, these also include many people who suffered a worsening of symptoms after the operation, had to undergo further operations, whose cancer spread to other parts of the body, or who have had to undergo harsh radiotherapy. They are indeed suffering. As Minister for the Environment, do you still deny the fact that “many children suffer from thyroid cancer”? We ask you to provide your response and reasons (See: Question 1).

You then go on to refer to “misinformation that children in Fukushima Prefecture are suffering from health problems caused by radiation,” denying any causal link between the high incidence of thyroid cancer in children and the radiation emitted by the disaster at the TEPCO Fukushima Daiichi Nuclear Power Plant.

If we use common sense and our good consciences to judge such a difference in the incidence rate, we have to think that there is a potential causal relationship with the Fukushima nuclear disaster. Those who claim otherwise must claim and provide evidences for causes other than radiation exposure caused by the disaster. Neither the national or Prefectural governments nor TEPCO have made any such claims or proofs, continuing only to state that it is “currently difficult to imagine a causal relationship.”

It is a fact that the disaster at the Fukushima Daiichi Nuclear Power Plant was a level 7 disaster, and that large amounts of radioactive material were released into the environment. Further, it is globally commonly accepted that exposure to radiation is the leading cause of thyroid cancer.

We hereby ask. If the cause of the 266 cases of thyroid cancer in children is not due to radiation exposure from the Fukushima nuclear disaster, what does the Ministry of the Environment claim and prove as the cause? (Question 2) It is extremely irresponsible for the Ministry of the Environment and the Japanese government, who should be responsible for the health of the people, to simply say that the 266 cases of thyroid cancer in children were not caused by the Fukushima nuclear disaster without investigating the cause. For the past 11 years, the government has rushed to deny or obscure any causal link between the high incidence of childhood thyroid cancer in Fukushima and other prefectures and the Fukushima nuclear disaster, and has failed to seriously assess the actual situation and investigate the causes. Only by conducting an accurate investigation of the actual situation and the causes can we establish correct relief policies and national health measures. We are afraid that the reason the government is not seriously assessing the situation and investigating the causes is that it is afraid that if it does so, it will be forced to admit a causal relationship between childhood thyroid cancer and the nuclear disaster, and that this would pose an obstacle to the restart and continuation of nuclear power plants. If this is the case, then it would mean that a conclusion has already been drawn from the beginning. This is not politics and government in the best interests of the people.

On the Ministry of the Environment’s website, there are three important notices posted:

1) Ministry’s disaster response, 2) Environmental rehabilitation following the Great East Japan Earthquake and Tsunami, and 3) Measures regarding radioactive materials (Act on Special Measures against Contamination by Radioactive Materials, Decontamination, Monitoring, etc.).
The ministry is responsible for measures to protect the public from radioactive materials from the Fukushima nuclear disaster.

It is very disconcerting that the Minister of the Environment, in charge of the Ministry responsibility to protect the people of Fukushima and other areas of Japan from the actual damage caused by radioactive materials (especially to health), should only refer to reputational damage, discrimination and prejudice, neglecting the issues of health impacts. The Ministry of the Environment has different responsibilities to the Ministry of Economy, Trade and Industry.

On 27 January, six young people who have suffered from childhood thyroid cancer and undergone thyroidectomies filed a lawsuit against TEPCO. Genjiren plans to publish a message in support of these courageous young people. It is our responsibility as adults to protect young people from discrimination and prejudice by eliminating the actual harm that obstructs their future, having been made sick by the illegal actions of state policies and private companies. We must not allow real impacts to be relabeled as “harmful rumours” because discrimination and prejudice exist, nor must we allow reality to be hidden.

We hereby express our strong protest and pose the above questions. Your response to Questions 1 and 2 is requested by February 10. We will disclose whether a response has been received, and the contents thereby.

The letter sent to the President of the European Commission (January 27, 2022) mentions that “many children are suffering from thyroid cancer,” however, this statement is concerning as it can spread false information that children in Fukushima Prefecture are suffering from health problems caused by radiation, and promote unwarranted discrimination and prejudice.

Thyroid cancers detected by thyroid examinations carried out in Fukushima Prefecture have been assessed by the Fukushima Prefectural Health Management Survey Review Committee and expert panels such as UNSCEAR (United Nations Scientific Committee on the Effects of Atomic Radiation), to the effect that at this time these cancers are unlikely to be caused by radiation.

The Ministry of the Environment has been making steady efforts to disseminate correct knowledge based on scientific findings in order to dispel rumors about the health effects of radiation in Fukushima Prefecture. We believe that the expression “many children are suffering from thyroid cancer” is inappropriate, as it may lead to discrimination and prejudice regarding the health effects of radiation.

Minister of the Environment
Tsuyoshi Yamaguchi

The five former prime ministers’ joint statement is published in Japanese and English. You can download the PDF files by clicking each image respectively.
元首相５名による共同声明は、日英両語で公開いたします。それぞれの画像をクリックするとPDFファイルをダウンロードできます。 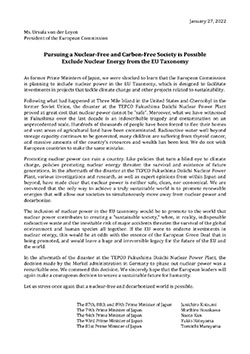 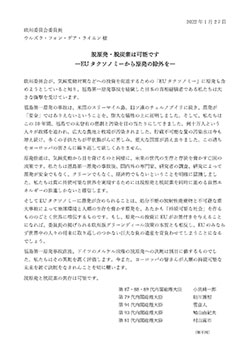 The Federation of Promotion of Zero-Nuclear Power and Renewable Energy